EasyCODE generates source code from your statecharts with all the benefits of automatic code production. If the generated source code doesn’t quite meet your specifications, then just quickly configure the code generator to get the code you need. This is a crucial aspect if you’re developing security-critical applications.

Integration of other state machines

States can contain references to other statechart files whose state machines are to be integrated as sub-machines when the code is generated.

EasyCODE is capable of automatically generating common source code for multiple statecharts compiled in a single project to facilitate the interworking and management of the statecharts.

Additionally, EasyCODE incorporates a function for creating a simulation application to run the generated code independently of the target environment. The EasyCODE SimulationController can be used to trigger the events being used in the statecharts either per mouse-click or using an event batch file.

This means that state transitions are shown directly in the animated statechart. Actions that are dependent upon the target environment are simulated by pseudo-actions. All triggered events and actions are recorded in a log. 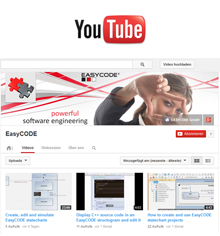